What makes a domain name hot (or not)

Lessons learned from the million most popular websites in the world.

We’ve all heard advice like “don’t use dashes in your domain names” and “shorter domains are better”, but how much does that stuff really matter? We decided to look at the million most popular websites in the world to find out. 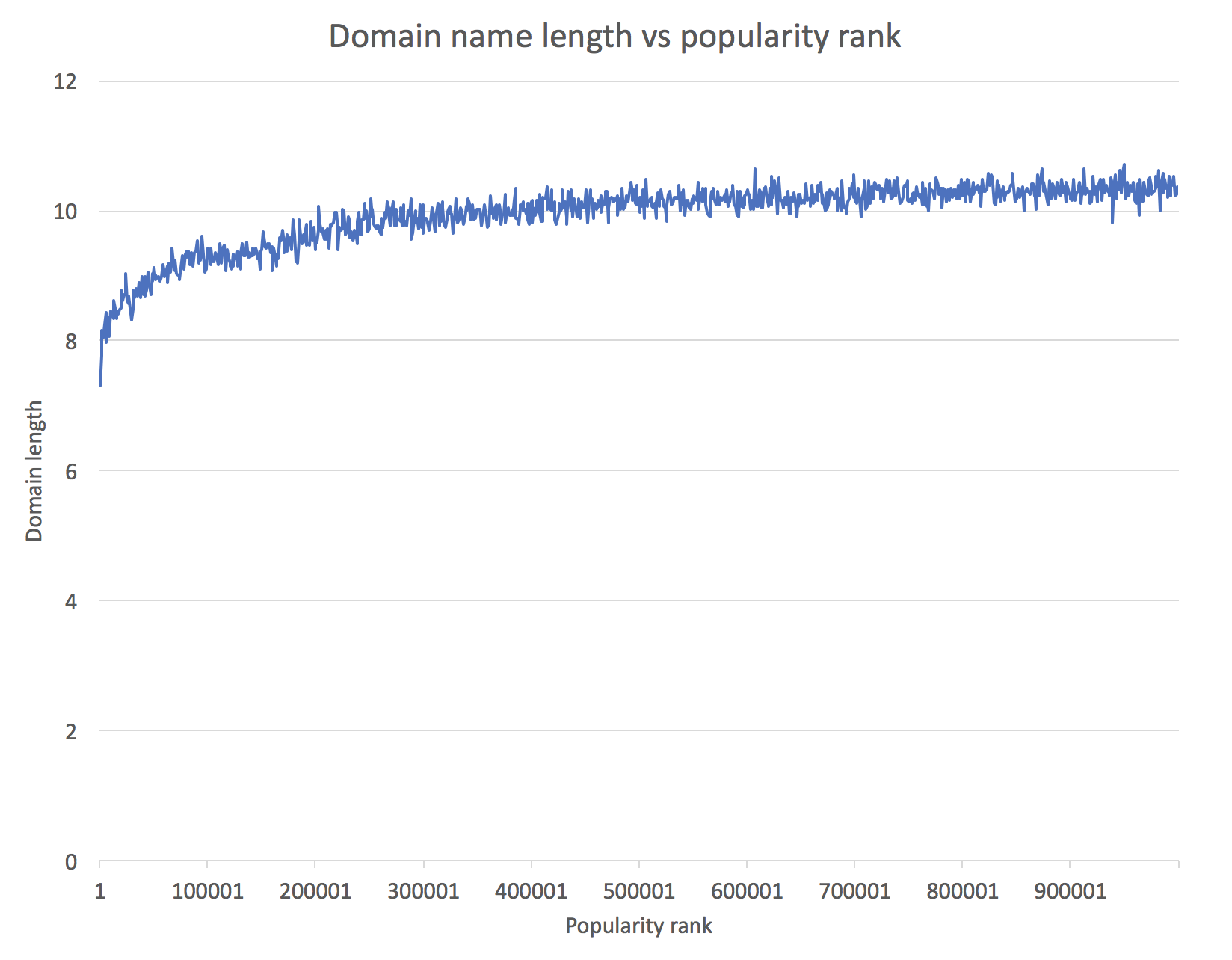 Here again, zoomed in to the top 1000 websites: 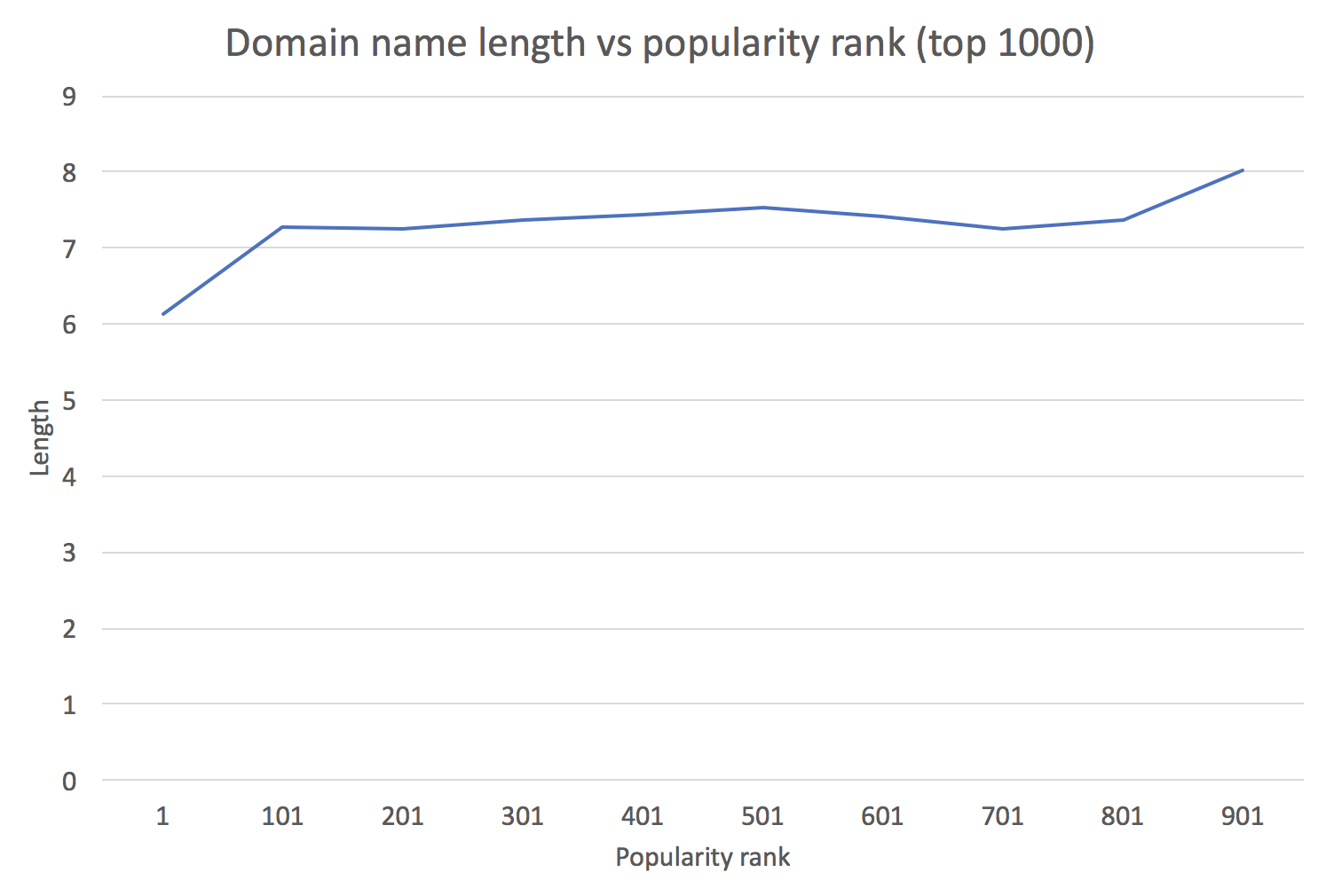 A top 100 website (Google, Facebook, YouTube etc) tends to have a domain name with just 6.1 letters. But by the time we’re at the top 1000 most popular, that average length increases dramatically to 8 letters.

And it keeps on climbing. On average, the longer your domain, the lower you will rank on this list, all the way up to 10.4 letters at the end.

(We counted the length of a domain while ignoring its extension, so facebook.com has 8 letters).

Length can be deceptive – after all, Facebook has 8 letters, but is a far better domain than most because it’s easy to say and remember. We decided to measure this by counting syllables in a domain name, and again a clear pattern emerged: 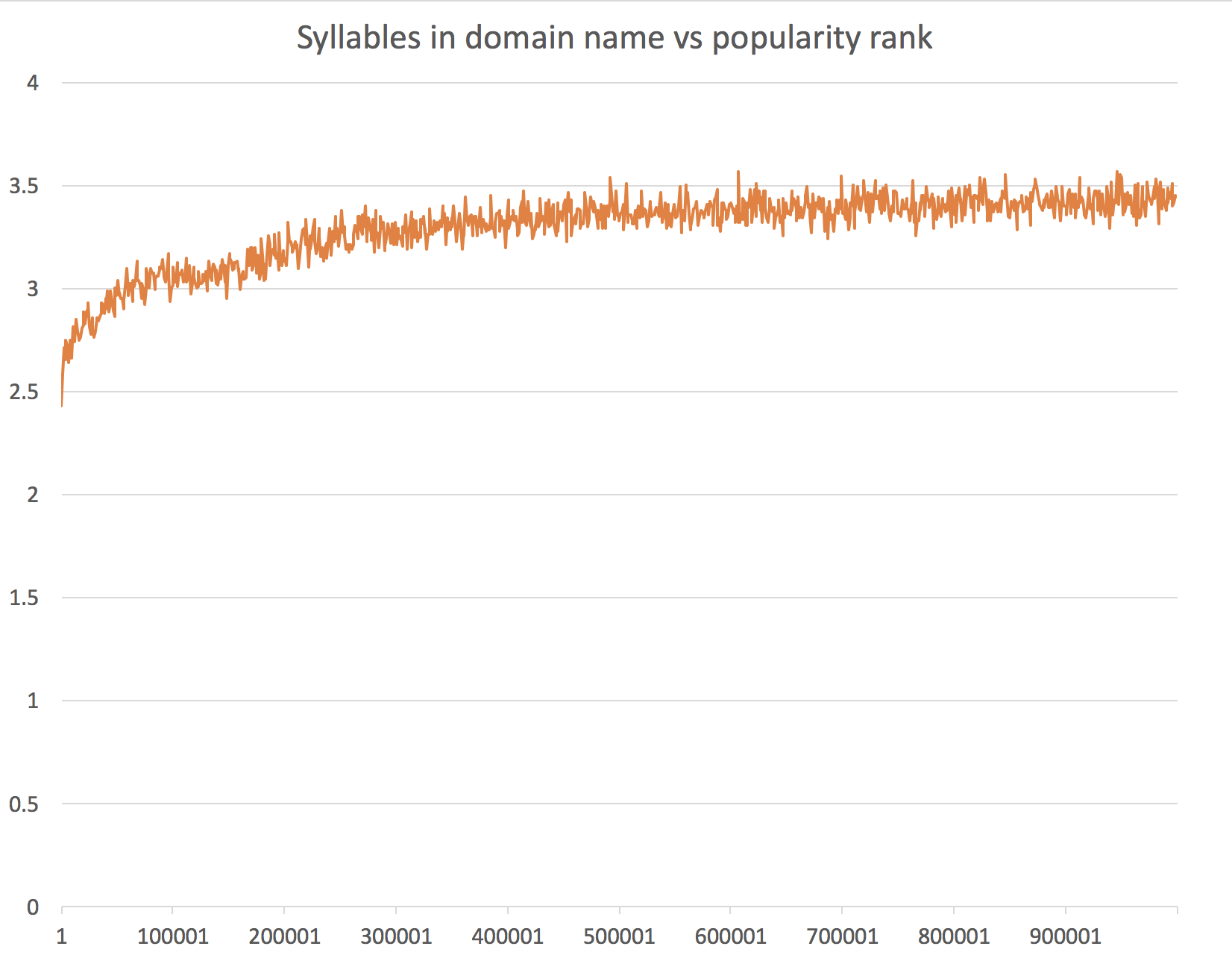 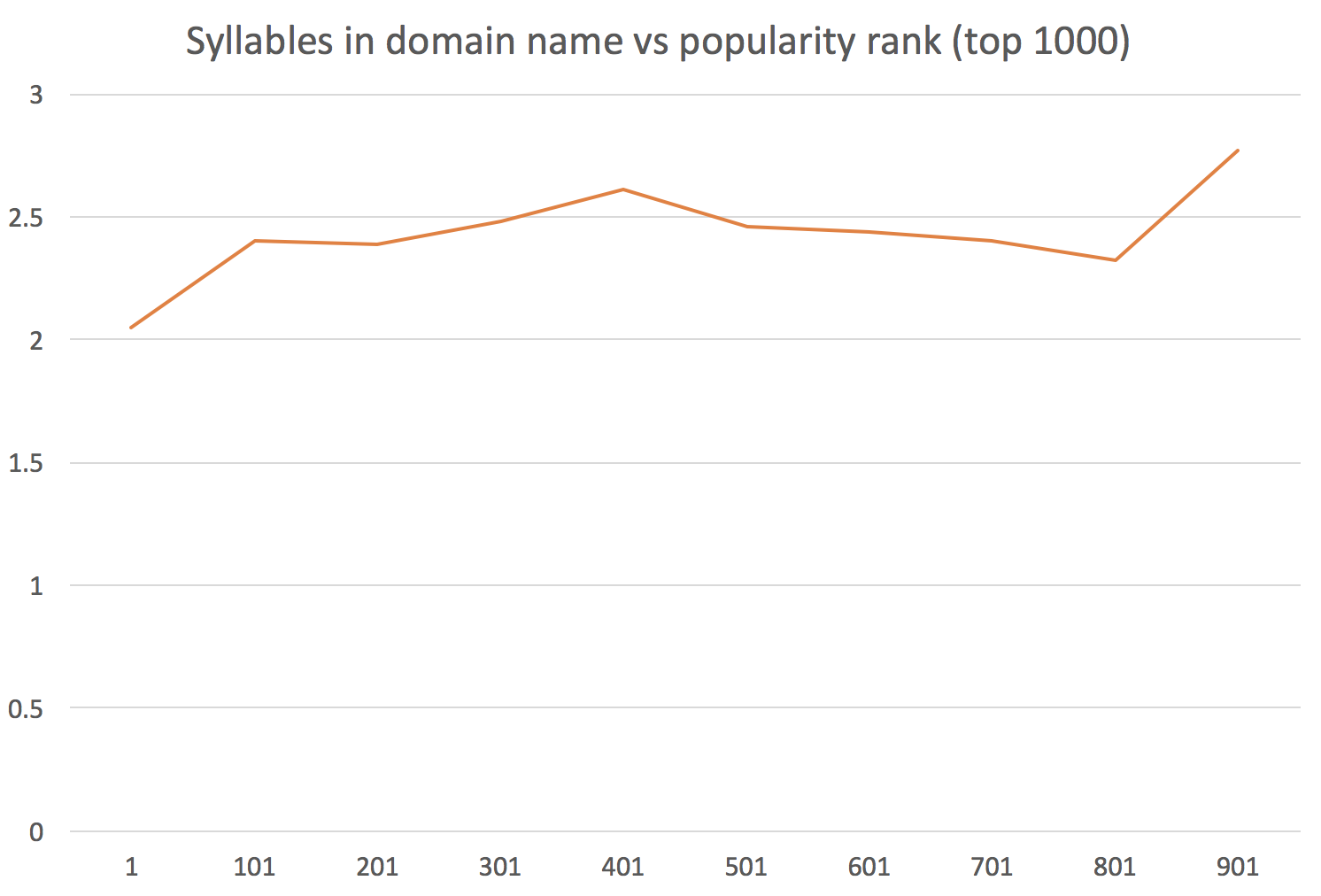 If you compare length and syllables they both turn out to be almost equally important.

We’ve heard it’s bad to have dashes in your domains, but what do the most popular websites in the world do? 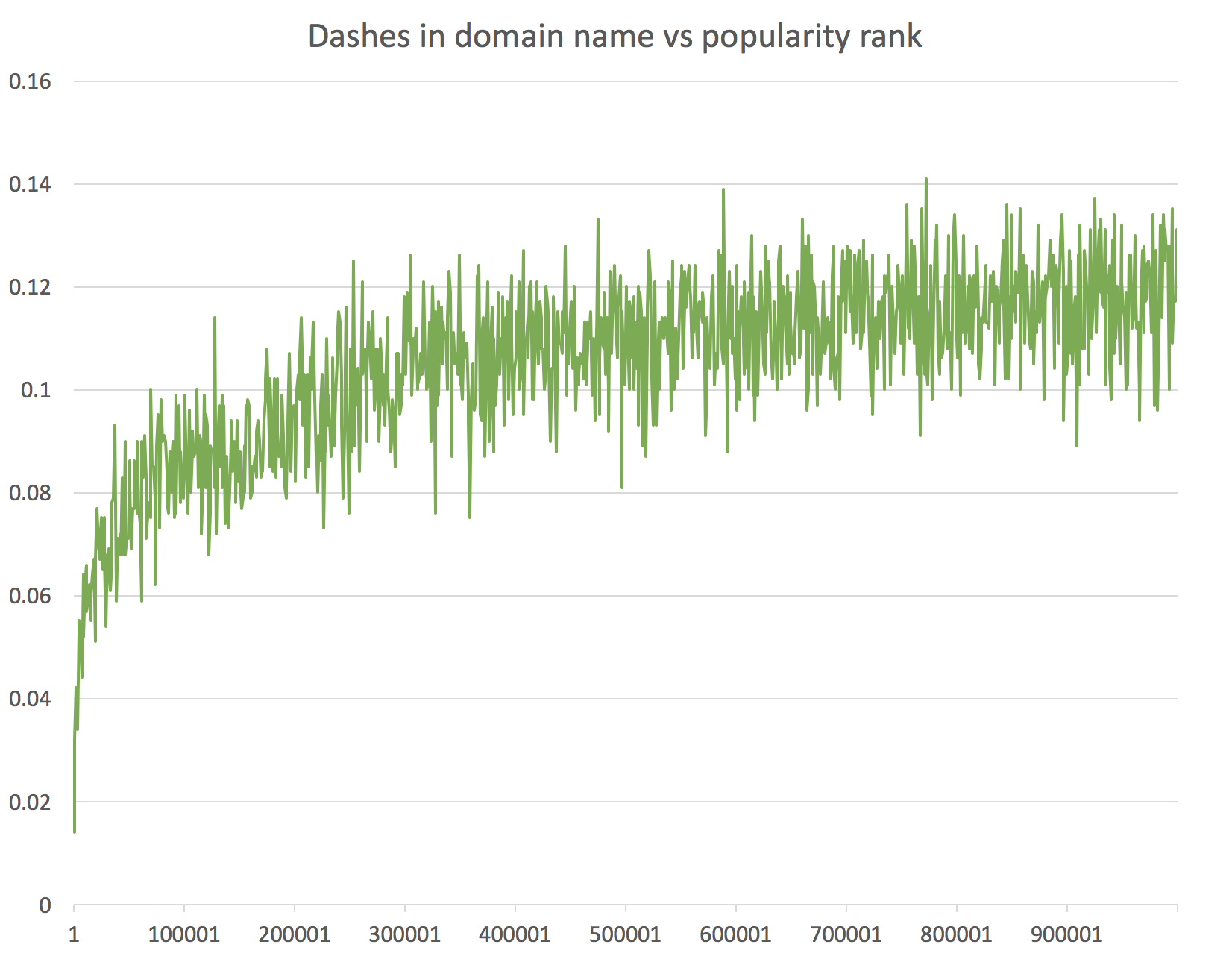 For the most popular 200 websites, there are zero domains with dashes. Even in the top 1,000, only 1.4% of domains contain a dash.

However that number rises significantly as websites become less popular, and holds relatively steady around the top 600,000 or so, where it averages around 11.5%.

That’s much higher than we might have expected. And whilst there may be many good reasons to avoid dashes in domain names, it would appear they don’t stop over 104,000 domains from being in the top million websites.

Of course, the other popular wisdom we’ve all heard is to avoid numbers in your domain names. But how much does it matter to the most popular million websites?

The answer is surprising: 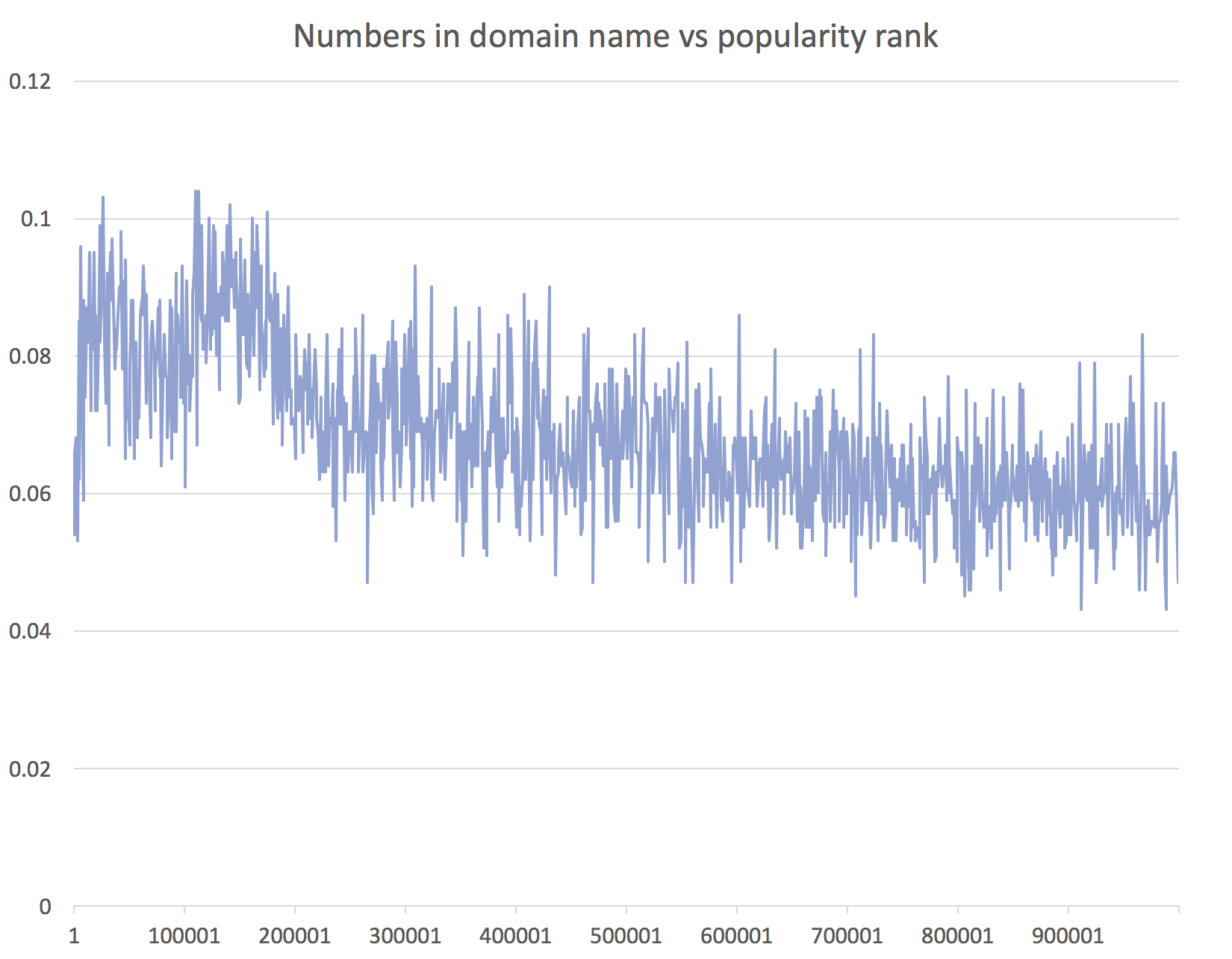 If anything, domains with numbers in are more popular than those without, which confused us immensely, until we started digging into the names themselves.

If we only count the inoffensive websites, we found numbers were unusually popular with Japanese domains, such as hao123.com (34th most popular site in the world), fc2.com (104th) and ci123.com (567th).

Overall, numbers were found in 6.8% of the top million domains.

It appears that a top 100, global domain name has:

And that if you’re willing to settle for a top million (which isn’t bad, to be fair), you’re likely to have:

For the absolute most popular domains, these rules hold strongly. For less popular websites, there are a lot of names that can get you there.

Brandpa specialise in inventing names for startups. Check out some of our ready-made startup names.